SA Economy will take another knock if students don’t graduate

There is a real risk that some of South Africa’s universities will not see out the 2016 academic year which ends in November. The ongoing “fees must fall” protests have seen classes disrupted at some institutions, and there are fears that exams won’t be written.

What might a total shutdown mean for the country’s labour market in 2017? To find out, we conducted an analysis using a model designed for economic research by the University of Pretoria in collaboration with the global Centre of Policy Studies.

The model allowed us to isolate and measure the impact of a large reduction in graduates entering the labour market in 2017 against a “business as usual” baseline scenario.

The results were extremely worrying. In one simulation – the worst case scenario – assumed in our modelling to be a 90% reduction in graduates entering the labour market, 2017 would be a bleak year. South Africa’s Gross Domestic Product (GDP) would fall dramatically, with the economy shedding around R5.6 billion. Investments would plummet.

South Africa produces around 80 000 graduates a year. But this excludes other non-degree qualifications like diplomas and certificates, which may also produce new skilled labour market entrants. In our model’s database, the relevant number worked out to be little lower – around 50 000 – since we assumed that some graduates also take up lesser-skilled jobs. They can move from there into skilled categories in later years.

Our analysis showed that a 90% reduction in skilled labour (graduates) entering the labour market in 2017 would have a negative impact on virtually every macroeconomic indicator. If it were accompanied by negative productivity or a loss in business confidence, the effects across the economy would be exacerbated and GDP could fall even further.

The results also suggest that inequality would deepen. Unemployment would rise and real wages for less skilled workers would fall. The only real winners in this scenario would be incumbent skilled workers, who would benefit from higher real wages.

How the analysis worked

Our economic modelling involved two simulation runs. The first generated a business as usual baseline projection for the economy. The second introduced the “shock” under investigation – in this case, a reduction in graduates entering the labour market in 2017. The results of the two simulations were then compared and the percentage change between the two runs calculated for each variable.

In conducting our analysis, we made a number of simplifying assumptions:

We made no explicit assumption about the potential impact of the shutdown on productivity, business confidence or any other naturally exogenous variables in the policy run. For the scenario discussed here, those variables are assumed to remain on their baseline path.

We also did not consider the cost of damages to institutions during the protests. For the purpose of this conversation, we restricted our analysis to 2017 – though it’s worth mentioning that the picture for 2018 remains bleak, even allowing for a bumper year of graduates entering the market. 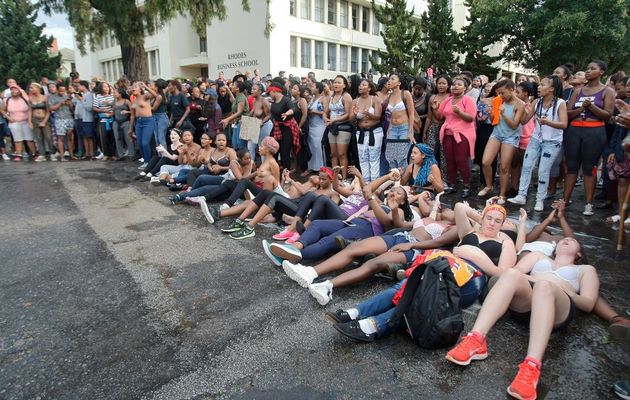 Results for some of the key macroeconomic variables confirmed our worst fears.

The reduction of skilled labour supply in the economy resulted in a drop in employment of 0.29%. This led to a fall in real GDP of 0.14%, or around R5.6 billion in 2017. That’s equivalent to the loss that national carrier South African Airways reported for the 2014/15 financial year.

On the back of reduced economic activity, and by implication, lower income generated, private and public consumption would fall by 0.2%. This is not good news, since the ability to consume is a proxy for welfare: the level of an individual’s consumption is an indication of how wealthy that individual is. In this scenario, as the economy adjusts to requiring a lower equilibrium amount of capital – a result of less skilled labour in the economy – investment spending would fall by over 0.8% in 2017.

Our results show that the average real wage rate in the economy would rise. The anticipated real wage increase would, of course, be restricted to skilled labour categories on the back of the skills scarcity created by the lack of new graduates. For lesser skilled labour categories, average real wages would fall slightly because of the shrinking economy and the associated shrinking of demand for labour.

Industries that are skilled labour intensive in their production process would, in our scenario, experience more damage. The biggest losers would include the education and health sectors. Their production would fall 0.25% below base. Given its strong link to the investment sector, the construction industry could be expected to shrink by 0.75%, shedding many jobs.

Higher education has never been more important to the process of building human capital – poverty’s kryptonite. This is evidenced by the high return it yields to graduates. In South Africa and other developing countries the return on education is much higher relative to other countries. The historical shortage of skills in the economy has made a degree, a diploma or any other proof of skills a valuable asset for everyone and a ticket into a better life.

The immediate economic impact of a national shutdown of universities should not be ignored or neglected. It would have significant, and potentially dire, consequences down the line – especially for those who are most in need.

The views expressed here are the authors’ alone and are not necessarily those of the organisation they are affiliated with.

Editor’s note: This article was updated after publication to clarify the impact of various scenarios on GDP.

Source: the Conversation, by Roula Inglesi-Lotz